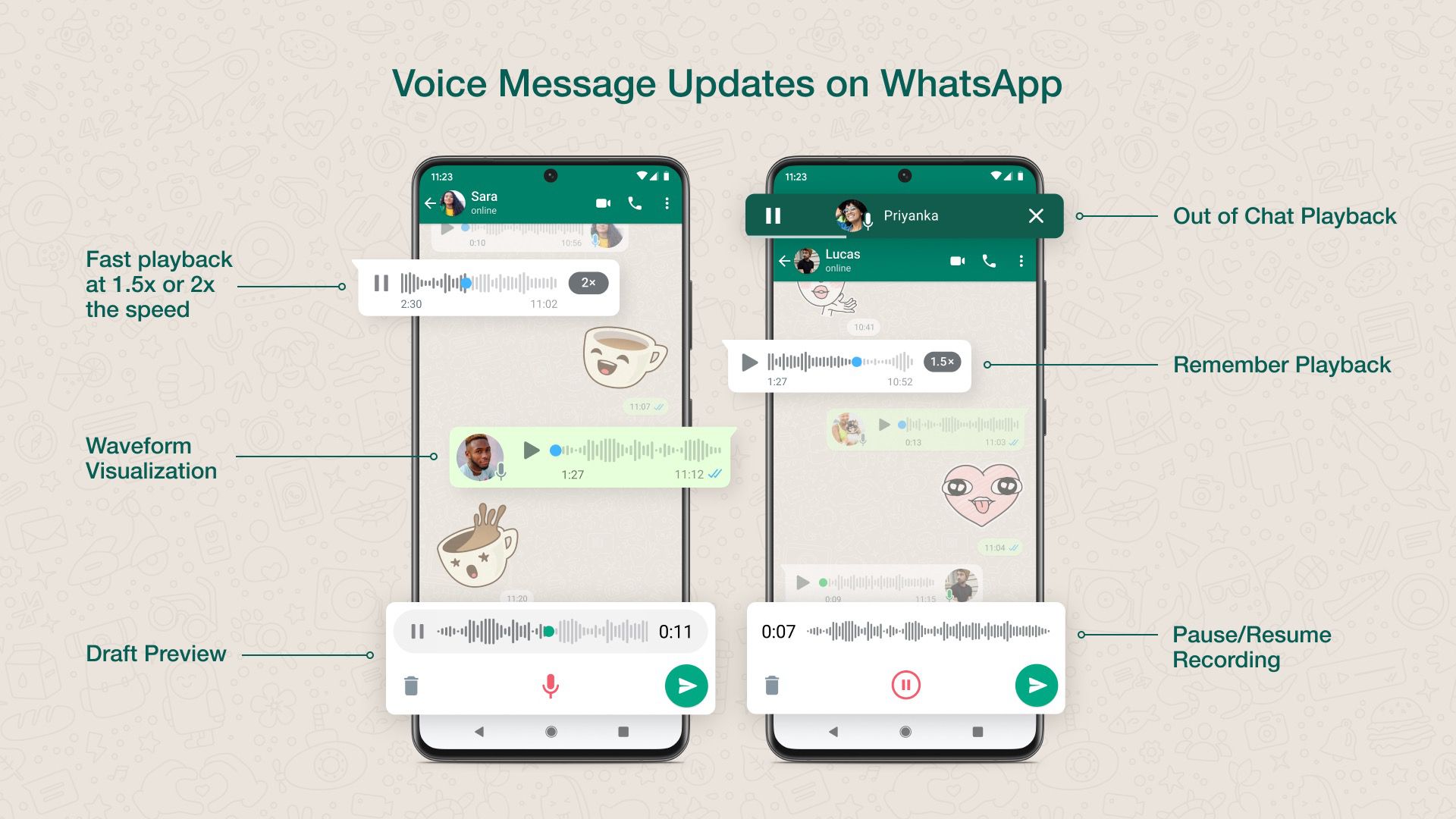 Voice messages or “voice notes” are often the preferred form of communication on WhatsApp, with an average of around 7 billion messages sent across the platform each day, and today WhatsApp announced several new features to improve the experience of their usage.

The most notable change that recently came out of beta testing is out-of-chat playback, which lets you listen to a voicemail outside of chat so you can multitask or read and respond to other messages.

If you listen to a voice note and then switch to the WhatsApp home screen or another thread, a new voice message playback interface appears at the top of the app with buttons to pause, resume or skip the voice note, as well as a waveform visualization and progress bar.

It’s now possible to pause a received voicemail and pick up where you left off when you return to chat, and you can also play voicemails at 1.5x or 2x speeds to listen to messages faster on regular and forwarded messages.

Finally, when recording a voicemail, you can now pause the recording and resume when you’re ready, while draft previews let you listen to your voicemails before sending them.

WhatsApp says the new voicemail features will be rolling out to all users of the encrypted chat service over the next few weeks.

WhatsApp has rolled out a new feature for users of its beta app that adds the ability to continue listening to a voicemail message after leaving the chat thread in which it was received. WhatsApp has been working on a global voice note player for some time to allow users to listen to voicemail messages in the background while browsing the app. Currently, if you play a voice note and then quit…

WhatsApp’s plan to bring reactions to iMessage-style messages on the massively popular chat platform appears to be entering its final stages, based on new screenshots shared by WABetaInfo. WhatsApp has been working on Message Reactions – or “Tapbacks” in Apple Messages parlance – for some time, with evidence of their development first emerging last summer. The function gives…

WhatsApp says it is rolling out a new option that makes messages disappear the default behavior for all new chats on the end-to-end encrypted messaging platform. It’s been over a year since WhatsApp launched its disappearing messages feature, which marks messages, photos, and videos to be gone after seven days. The feature can be enabled for direct messages and in groups…

In iOS 15.4, Apple introduced a fifth “American” Siri voice, which can be selected in the Settings app by going to Siri & Search and then selecting Siri Voice. The new voice is the fifth option, which joins Siri’s four original American voices. The “American” voice is the only new voice that was added today for users in the United States, and it looks like there weren’t any other…

WhatsApp is working to allow users to conduct polls within groups on the chat platform, the latest iOS beta has revealed (via WABetaInfo). The upcoming ability to create polls within WhatsApp groups has been confirmed with screenshots that show the process of creating a poll, with users being able to ask a poll question and group members being able to choose from polls. predefined answers. Polls will only be…

WhatsApp is testing a much larger 2GB cap for file transfers between users of the instant messaging platform, WABetaInfo reports. WhatsApp’s file-sharing capabilities have become a key feature of the service, and the app has included the ability to share media files in chats since 2017, but its 100MB file size limit hasn’t changed. during this period. However, according to…

Twitter has beefed up its direct message search feature so users can now search their inbox using keywords and names to find the specific message they’re looking for. The DM search bar is not new, but previously it only allowed you to find the name of a person or a group chat in your inbox. The latest development means you can now refine searches to find particular content in your…

Apple Stores and Apple Authorized Service Providers will now be alerted if an iPhone has been flagged as missing from the GSMA Device Registry when a customer brings the device in for repair, according to an internal memo obtained by MacRumors. If an Apple technician sees a message in their internal MobileGenius or GSX systems that the device has been reported as missing, they…

Google releases Chrome 100 for iOS and desktop with updated icon

Google today released Chrome 100, the latest version of its browser available on Mac, PC, iPhone and iPad, Android devices, and more. Chrome 100 is notable for introducing the first major icon update for Chrome since 2014. The updated design was first previewed in February and features a simplified icon with brighter colors and no shadows. Chrome designer Elvin Hu said…

Apple last week introduced the iPhone SE 2022, an upgraded version of its low-cost smartphone. The 2022 iPhone SE looks identical to the 2020 model, with only internal upgrades, and it’s arguably Apple’s dullest iPhone. So who is it for? Read on to find out what we think. Subscribe to the MacRumors YouTube channel for more videos. If you’ve seen the 2020 iPhone SE, well, you’ve…

When it comes to downloading iOS software updates, Apple users can be reasonably divided into two camps: those who manually check for updates the moment Apple releases them, and those who are happy to let their device’s automatic updates feature will take care of everything in the background. with minimal input from them. Although it is generally recognized that manually typing in Settings ->…

Bloomberg’s Mark Gurman expects next-generation iPad Pro models to launch in the fall of this year, according to his latest newsletter. In his “Power On” newsletter, Gurman speculated that since Apple didn’t launch any new iPad Pros this month at its “Peek Performance” event, it’s reasonable to expect that new models arrive between September and November of this year. In a previous report,…