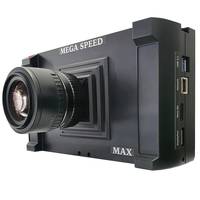 Summary of the press release:

The Mega Speed ​​MAX V3 camera can record high speed video in two ways. The first is to record the video to the cameras SDRAM for a few seconds, stop recording, download the video, then record again. This works great for applications that require the highest possible frame rate for cameras, but it takes too long for some other applications that require fast repetitive backups or long-term recording at a frame rate. slightly lower.

The second way the Mega Speed ​​MAX V3 can record the video at high speed is to save it directly to the internal drive every time you press the record button. With Mega Speed’s Direct-to-Drive technology, there is no wasted waiting during the download cycle since data is immediately saved to disk as it is recorded. When recording in this way, the Mega Speed ​​MAX can still record at a fast enough frame rate and large enough frame size to satisfy a variety of high-speed video recording applications. .