Featuring Samsung’s latest V-NAND and a new proprietary controller, the 990 PRO series offers the highest speed currently available from the PCIe 4.0 interface1. The SSD offers sequential read and write speeds of up to 7,450 megabytes per second (MB/s) and 6,900 MB/s, respectively, while random read and write speeds reach up to 1,400,000 and 1,550,000 IOPS2, respectively. With up to 55% improvement in random performance over the 980 PRO, the 990 PRO is particularly well suited for intensive gaming as well as creative and productivity tasks. 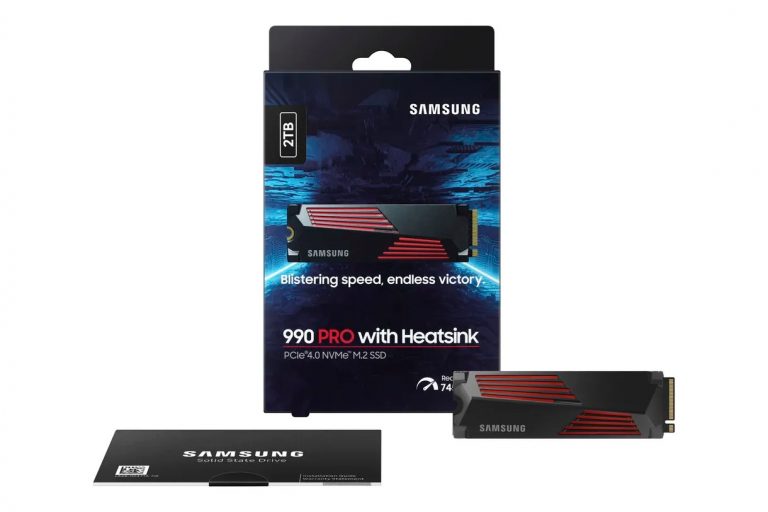 Built on a low-power architecture, Samsung’s newly designed controller dramatically improves SSD power efficiency by up to 50% compared to the 980 PRO.4. Additionally, the 990 PRO uses a nickel coating on the controller and a heat sink label on the drive for reliable thermal management. Samsung’s Dynamic Thermal Guard technology further ensures that the drive temperature remains within the optimal range.

The 990 PRO version with heatsink offers an extra layer of thermal control while its RGB lights add more style to the player.

Samsung’s 990 PRO is also a great solution for laptop and desktop upgrades as well as build-your-own PCs, delivering a significant performance boost while using less power for up to increased battery life and thermal management.

The 990 PRO will be available worldwide from October with Manufacturer’s Suggested Retail Prices (MSRP) of $179 for the 1TB model and $309 for the 2TB. 4TB will be available from next year. For more information, including warranty details, please visit samsung.com/SSD or semiconductor.samsung.com/internal-ssd/.

2022-08-24
Previous Post: 7 brain-computer interface companies you need to know about
Next Post: ALS Patients, Others Wanted for Brain-Computer Interface Research | BrainGate’s BCI trial in paralyzed patients continues to recruit at 5 US sites