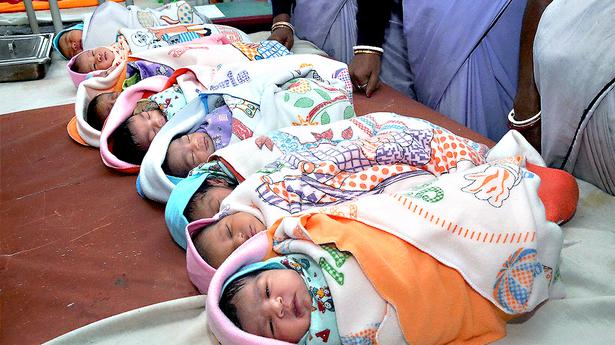 The central government plans to revamp the civil registration system (CRS) to enable real-time birth and death registration with minimal human interface that will be independent of location, according to the 2020 annual report- 21 of the Ministry of the Interior. Foreign Affairs (MHA).

The CRS, managed by the Registrar General of India (RGI), is linked to the National Population Register (NPR), which already has a database of 119 million people. The report said it was necessary to update the NPR again, first collated in 2010 and updated in 2015 with Aadhaar, mobile phone and ration card numbers “to incorporate changes due to the birth, death and migration”. The RNP needs to be updated with the decennial census exercise which has been postponed indefinitely due to the COVID-19 pandemic.

The report states, “The CRS system faces challenges in timeliness, efficiency, and consistency, resulting in delays and under-coverage of births and deaths. To address the challenges the system is facing in providing timely service delivery to the public, the Government of India has decided to introduce transformational changes in the country’s civil registration system through a computer system. [information technology] backend enabled leading to real-time birth and death registration with minimal human interface.

He said the changes would be in terms of automating the delivery points of the process so that service delivery is time bound, uniform and free from discretion. “Changes would be long-lasting, scalable, and location-independent.”

In the past year, several instances of compromise of the online registration system were reported by States, with logins and passwords of sub-registrars being compromised and available in the open domain.

Following this, Deputy Registrar General Sandhya Singh issued a notice to Chief Registrars of all states to prevent misuse of online portal user and login ID.

“A few state governments have reported issuing fake birth and death certificates, including misuse of user/login ID and password created in the existing portal/software developed for the “online registration of births and deaths by unauthorized persons. This has resulted in the registration of criminal cases in some cases,” the July 28, 2021 notice said.

Currently, the online software available at www.crsorgi.gov.in is operational in 22 states and union territories.

Changes to the law


The RGI which operates under the MHA has also proposed amendments to the Births and Deaths Registration Act 1969 which will enable it to “maintain the database of nationally registered births and deaths”.

According to the proposed changes, the database can be used to update the databases of population register, electoral register, Aadhar, ration cards, passports and driving licenses, The Hindu had reported.

The RGI is empowered under Section 3(3) of the 1969 Act to take steps to coordinate and unify the activities of the Chief Registrars of Births and Deaths of all States.

The MHA report noted that the proportion of total births and deaths registered had seen a steady increase over the years. “The level of birth registration increased from 81.3% in 2009 to 89.3% in 2018. On the other hand, the level of death registration increased from 66.9% in 2009 to 86.0% in 2018,” he pointed out, adding that the level of total registration of deaths was lower than that of births in most states except Andhra Pradesh, Goa, Gujarat, Haryana, Karnataka, Kerala, Madhya Pradesh, Maharashtra, Odisha, Punjab, Rajasthan, Sikkim, Tamil Nadu and in the Union Territories of Andaman and Nicobar Islands, Dadra and Nagar Haveli and Daman and Diu and Lakshadweep.

“The lower level of death registration can in part be attributed to the underreporting of deaths at home and deaths of women and infants,” he said.