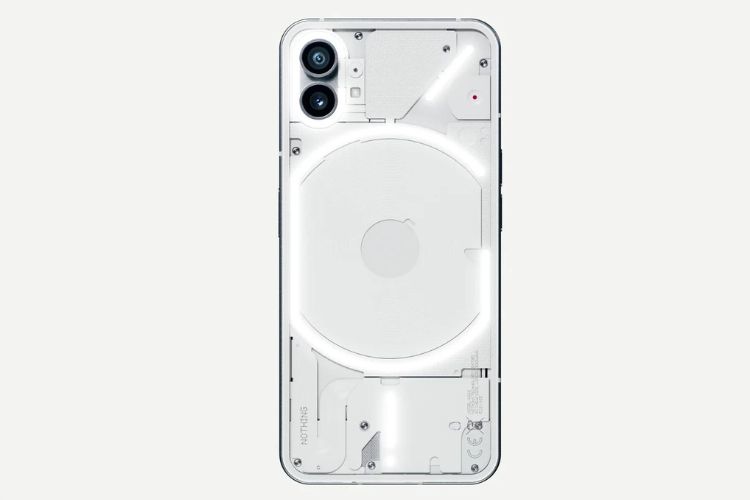 The Nothing(1) phone is due to arrive on July 12 and before that, the Carl Pei-led company has given us enough to keep the anticipation afloat. Last week we got a clear preview (pun intended!) of the company’s first phone and we can safely say that it’s interesting! On top of that, the smartphone has now appeared in a recent MKBHD video and this is purely to explain how its notification LEDs will work, which was also shown recently. Spoiler alert, it’s quite fun! Here’s everything you need to know.

All About Nothing Phone Glyph Interface (1)

As previously revealed, the Nothing(1) phone has a transparent back, which gives us a glimpse of its internal components like the wireless charging coil while drawing inspiration from the iPhone 12. Which looks even more appealing, this is the mouse-like shape (comprising a small C around the camera setup, a larger C around the charging coil, an exclamation point at the bottom, and a dash in the upper right corner) formed by more than 900 LED lights. If you remember the announcement event of Nothing phone (1), this shape was the only visual element that was teased at the time.

Now this LED setup will light up and it won’t just be for visual appeal. This is intended for shine for calls, messages and more app notifications. The LED lights will turn on fully or partially. For example, the lights around the charging coil light up when the phone is being used for wireless or reverse charging, and the exclamation point lights up when the phone is also connected to a charger with a charging indicator. Additionally, there is a red LED, which is a video recording indicator. The all-round light can come in handy if you want to use the LED lights as fill lights while taking photos and videos.

You should be aware that the LED lights will not be on permanently. To reactivate them, you can use the ‘“Flip to Glyph” functionality by simply shaking the phone a bit. You can watch the video for a better idea.

This is what Nothing calls the Glyph interface. The The glyph interface is part of the settings and allows various customizations. You can configure LED lights, set ringtones for various features (up to 10 are available), and more. You’ll also be able to assign ringtones and parts of the LED light setup to certain contacts so you can easily identify who’s calling or texting you without actually checking the display.

We can expect more customization options at launch or perhaps via future software updates. The video also gives us a look at the front of the phone (1), which has a punch hole placed in one corner and nothing too out of the ordinary. At first glance, the Nothing(1) phone is turning heads, but it remains to be seen how well this concept is received and whether or not it is able to persuade people to make the purchase.

The Nothing(1) phone will be powered by a Snapdragon chipset, will run Android-based Nothing OS and will have many more exciting features. More details are expected to be released at the company’s July 12 event. So stay tuned for all the disclosure you need. And if you are interested, you can participate in the latest auction to get the limited edition of the phone (1) via StockX. Only 100 units are available, however. Visit nothing website to learn more about it. Share your thoughts on the device’s intriguing notification LEDs in the comments below.

2022-06-22
Previous Post: Nothing Phone (1) Glyph Interface: All About Those Lights On The Back
Next Post: Thermal Interface Market SWOT Analysis, Business Growth Opportunities by 2030 – San Juan Independent