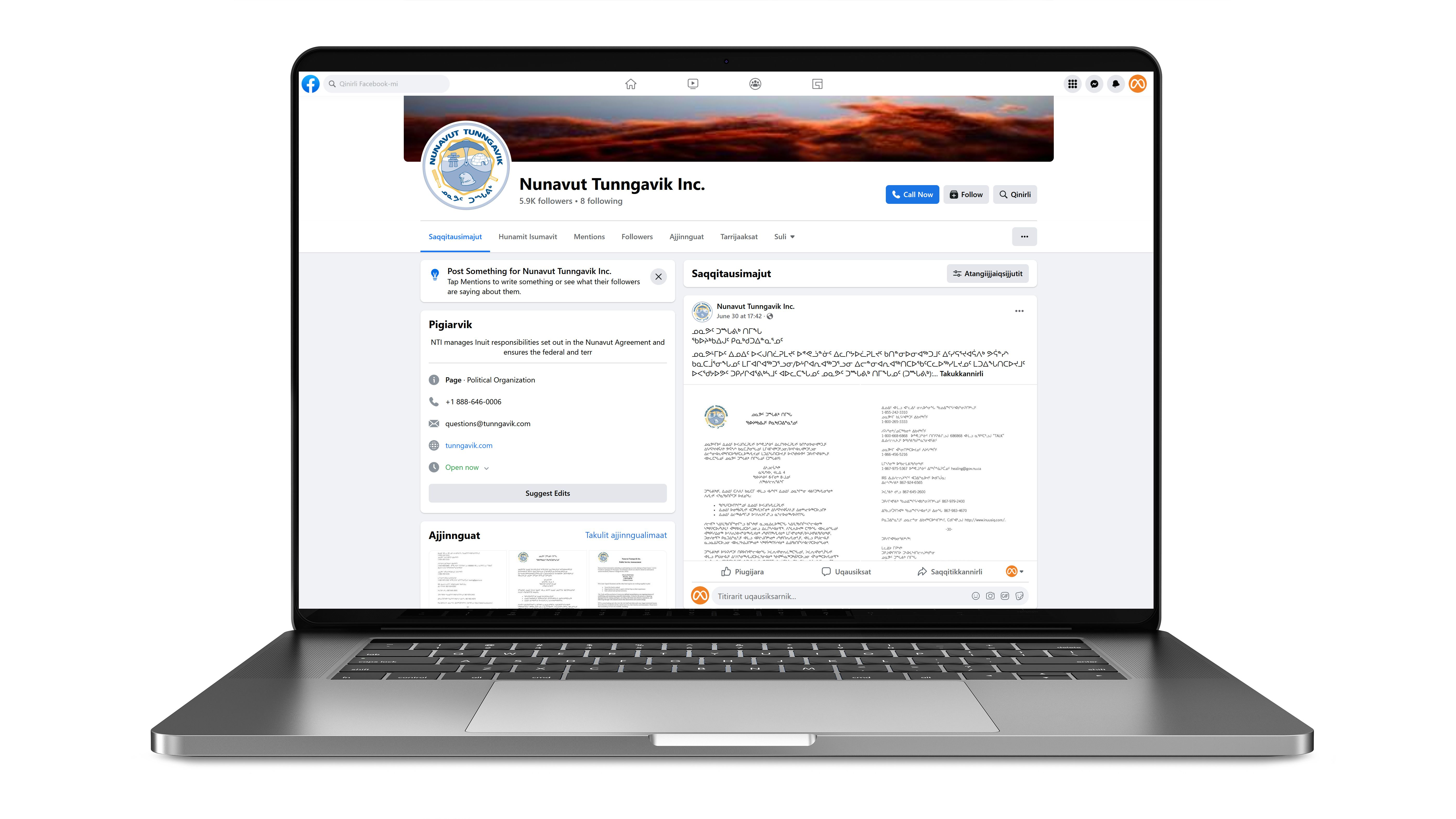 After four years of work, the Facebook desktop interface will finally be available in Inuktitut on July 8.

“[The Inuit language] is a vehicle to explain who we are, to help understand who we are in the world”, Aluki Kotierk, president of Nunavut Tunngavik Inc. (NTI), Nunavut’s land claims organization, said in a telephone interview.

“So it’s very important as Inuit that we see our language in all aspects of our lives and that it’s not just used in our homes, but that we see it in public, on television, that we hear it on the radio and, in that vein, it makes sense that we can also use it in social media.

The idea for the project dates back to 2018 when Kotierk sat down with Kevin Chan, director of global policy for Meta, Facebook’s parent company, and talked about the need to translate Facebook into the Inuit language, especially in a place like Nunavut that has no roads and where there is a huge distance between villages.

“Social media has become very important in our communities,” said Kotierk. “Many people know that the communities are all accessible by plane and it is very expensive to travel, so Facebook is a very good way to be able to be in contact with each other.

In communities, local Facebook groups have become important hubs for everything from organizing events to returning lost items to parents telling their kids to come home for dinner.

Kotierk says the project is important on many levels, from young people seeing their language reflected in the realm of technology, but also for unilingual seniors to be able to fully participate in this important tool.

In all, 2,000 language strings on Facebook needed to be translated.

The last Canadian census found that there are 42,065 Inuit language speakers in Canada. From these, 39,770 speak Inuktitut.

Initially, the intention of the Facebook project was to use terminology that Inuit language speakers themselves put into the Facebook interface, but the number of dialects complicated the process and made it difficult to determine the best word that would actually be used. for terms like “Like” or “Page”.

It was therefore decided to focus on Inuktitut, the most spoken Inuit dialect. The The Pirurvik Centre, a center in Canada’s Eastern Arctic Territory, Nunavut, which works on Inuit language, culture and well-being, led the translation process, in collaboration with other speakers of Inuktitut to develop the terminology of some 4,500 words needed by Facebook.

“It’s so exciting because I’ve always been of the view that language not only expresses who we are and how we fit into the world, but it’s a practical language that we can use in our lives. in 2022. It’s really important as Inuit that we develop new terminology for concepts or products that weren’t part of our culture before, but can easily have a word that we understand.

2022 marks the beginning of UNESCO Decade of Indigenous Languages ​​2022-2032, and Kotierk says the project is an important contribution to making the Inuit language more visible.

The official launch of the new Facebook interface will take place at a press conference in Iqaluit, the capital of Nunavut, on July 8, Kotierk said.

The day before Nunavut Day, July 9, makes the launch even more poignant, she says.

“We proudly affirm our language in modern technology as a way to affirm who we are, on Nunavut Day, a day all Inuit in Nunavut celebrate as the day Nunavut became a territory and Inuit been able to achieve this,” said Kotierk.

Arctic: German project to host everything published in Siberian and Arctic languages ​​to seek new funding, Eye on the Arctic

2022-07-08
Previous Post: Conference on trends at the interface of mobility, sustainability and technology
Next Post: Future Scope of Haptic Interface Market – Designer Women