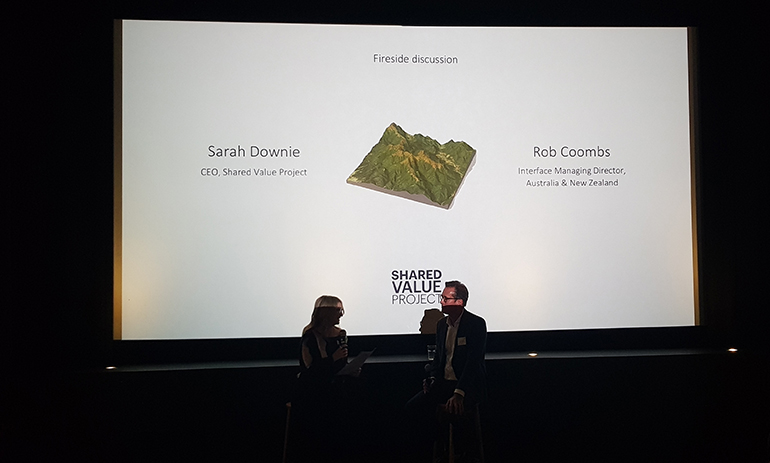 Interface Australia and New Zealand Managing Director Rob Coombs looks back on the company’s journey to beyond zero and how times have changed.

Back when Interface first made the decision to become a sustainable organization, talking about sustainability was not a way to boost stock price, nor was it safe to talk about it to investors.

Today, the company’s sustainability credentials are included in all communications with investors.

It’s a sign of the breadth of the conversation around the business imperative to reduce environmental impact and act sustainably.

It’s also a testament to how far Interface has come.

From 1994, the carpet tile manufacturer set itself the goal of “mission zero”. Armed with a 25-year business plan, the goal was to achieve zero emissions targets by 2020.

True to its word, it became the first global flooring manufacturer to sell all of its products as carbon neutral throughout their life cycle.

The story of how he did this – under the guidance of the company’s visionary founder, the late Ray Anderson – is captured in the documentary beyond zero.

See our interview with director Nathan Havey to find out why he brought the story to the screen.

At a recent screening hosted by the Shared Value Project, Interface Australia and New Zealand Managing Director Rob Coombs spoke to the audience about the company’s quest to eliminate the company’s negative impact on the environment and how times have changed.

Coombs, who has worked at Interface for 30 years and was there at the start of the sustainability journey, said at the time they understood the moral imperative, but it took them a while to relate to it. to a commercial imperative.

“Where it really took off within the company was when we all realized it wasn’t just something you did at the end of the day after you finished your day job. . It could actually be part of a much more successful organization in a whole range of fairly traditional ways,” Coombs said.

“We used to say, if you stood in front of your average CFO and said, ‘I have a program here that can lower your costs, can lead to much better product design, can lead you to a lot more customers, can increase your bottom line, and can attract and retain fantastic people,” would [they] Take it? That’s when we started to see what it could be.

He credits Anderson’s leadership for maintaining the company’s mission – admitting that at first the company was “following Ray quite blindly”.

“Of course you wanted to believe. It was a noble thought that you could actually transform the business in this way and have a much wider impact, in a very beneficial way. But, you know, it’s not the path of least resistance, and it still isn’t,” Coombs said.

“You need that leadership dynamic. And we were very lucky to have Ray, of course, in that role.

“I think if you look at many organizations that have made progress here, you find them led by founders or those who were involved in building the business. And you know, you had in Ray someone at 62, very focused on his legacy. And I think that’s a big part of what pushed him and pushed us in turn.

However, what made the trip a success was that everyone in the organization, from top to bottom, got on board with the mission. Coombs remarked that although there had been leadership changes over the years, it was clear to everyone who came that they had to continue with the mission or they would be rejected by the team.

This focus on sustainability has also resulted in a strong culture of innovation throughout the organization.

But whereas in the beginning, Interface’s mission zero was something that set them apart. Coombs said their competitive edge has shrunk in recent years as more companies realize it’s possible to do business more sustainably and achieve success.

“There is no doubt that the gap between us and our competitors is nowhere near as wide now as it was then, as our competitors are working hard to match what we are doing. And that’s a very good thing,” he said.

“And we’ve been through a lot of that over the years,” he said.

He admitted that despite the company’s successes, there were still areas for improvement.

“We are less strong socially than environmentally. And we’re kind of working hard to close that gap,” he said.

“Ray was very energized by planetary restoration. He was less motivated by social engagement, inclusion, diversity, etc. So we’re playing a bit of catch-up there in a way that we don’t feel comfortable with.

He added that there was also now an understanding across the industry that there are a range of issues, particularly around the circular economy, that no individual company can solve alone.

This sparked what Coombs called “pretty radical collaboration” between supply chains and with competitors in the marketplace to make industry-wide progress.

“So I think it’s about moving from that kind of competitive orientation to, at least in some areas, recognizing that you have to think in a completely different way within your space, within your market, to solve some of these really critical issues,” he said.

With an eye to the future, Coombs said the company’s current goal is to go beyond zero, to carbon negative.

“So we launched a range of products such that there is less carbon in the atmosphere at the end of the process than when we started manufacturing it.

“[We’re also] focused on ensuring that the carbon footprint reduction we achieve goes beyond the factories, beyond the product, to the entire organization as a whole, and then we really focus on that challenge of l circular economy, which I think is the most difficult. ”

If you would like to host your own screening of Beyond Zero with staff or stakeholders, contact Cerisse Denhardt at the Shared Value Project: [email protected].