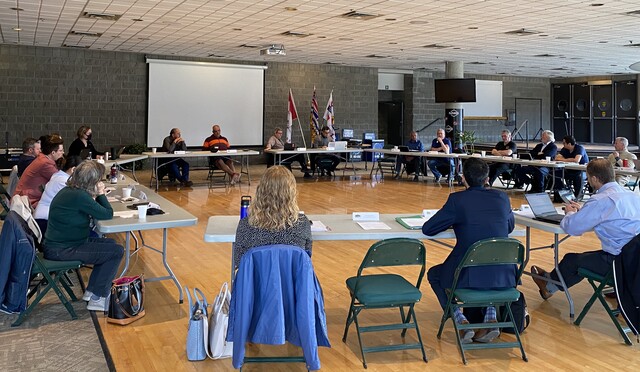 Representatives from the City of Kamloops and the Tk’emlups te Secwepemc community met Thursday for a community-to-community forum.

Following July’s threatening Interface Fire that prompted the evacuation of parts of two city neighborhoods, a new partnership has formed to coordinate emergency response on both sides of the river Thompson.

At the Tk’emlups te Secwepemc and City of Kamloops Community-to-Community Forum on Thursday, staff and elected officials from both governments heard about the new Emergency Response Coordination Group created after the ‘event.

City of Kamloops chief executive David Trawin said the group was made up of representatives from TteS, the city, the Thompson-Nicola Regional District and Emergency Management BC.

“It was to coordinate our emergency support services – which support people who have been evacuated – and also to support and coordinate if we had to do evacuations or if there were emergencies in our two borders,” said said Trawin.

Tammy Robertson, the city’s external relations manager, said it was a very informal arrangement when the group started – days after the Juniper fire – because local governments felt it was necessary to work together on emergency response.

“We started to think about who else could be at the table and how we could support other communities, which led us to think that we should have formalized the mandate of the group, which we now have. done,” Robertson said.

She said one of the main goals was to maintain strong lines of communication and the group had shared their contact details for a 24/7 response.

Robertson said the group was preparing for a half-day planning session in April, training to be ready in the event of a disaster.

“We have services that we are continually looking to improve, whether from the province or from ourselves, and having these open discussions has been really enlightening,” Robertson said.

Justin Gottfriedson, acting TteS and Kukpi7 advisor, said the group is a “shining example” of how TteS and the City of Kamloops work together and the need for strong partnerships.

“Kamloops is a transportation corridor and people are going to come here regardless of their evacuation plan or not. We have therefore taken a very pragmatic approach to developing this group, pooling our knowledge, resources and experiences and uncovering a wide range of potential gaps and voids that may have been experienced in the past,” he said. -he declares.

Gottfriendson said it was almost by “happy accident” that the band formed.

“I can’t believe it’s taken this long to come together and pool our resources, and just share the experience,” he told Castanet.

“[Tk’emlups] always opened our doors to house people within our community and to support those in need. And the next evolution of that process was to come together and form that group, to share our information, and to be much more proactive and prepared for the unknown.

Kamloops City Councilor and TNRD Emergency Services Committee member Mike O’Reilly told the assembled group that he would advocate for the regional district to strengthen its partnerships with neighboring First Nations.

“It’s an area – and I’m going to push and work for it – to have a strong relationship with TteS and other First Nations, especially when it comes to wildfires and the lands around us. And I think a First Nations voice at our committee would be welcome.