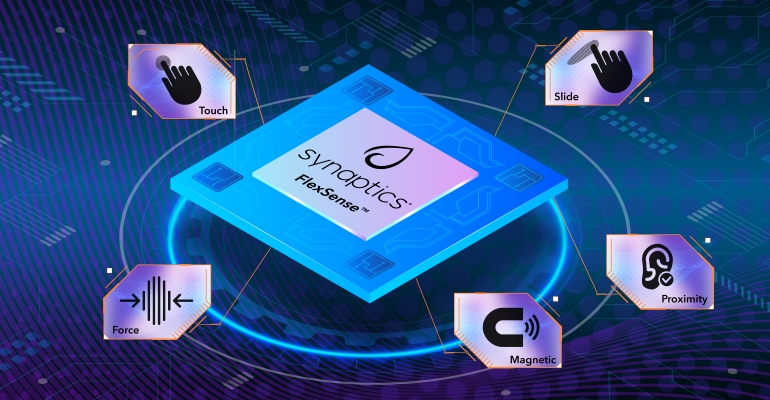 Synaptics touch sensing company® Inc. refocused its business model to serve the booming IoT market. As part of this trend, the company introduced its FlexSense family of fusion processors that address the complexities of integrating inputs from multiple sensors.

The processor intelligently captures and processes input from up to four sensors, simultaneously, in a tiny, ultra-low-power form factor that’s 80% smaller than existing solutions, according to the company. The processor has the ability to integrate combinations of capacitive, inductive, hall effect and ambient sensing modalities on a single processor. This, in turn, can improve the end-user experience by bringing reliable, low-latency, and context-aware force, proximity, and touch sensing to Internet of Things (IoT) devices such as true wireless (TWS) stereo headphones, game controllers, augmented reality (AR) and virtual reality (VR) headsets and wearable devices.

Related: Specification and qualification of sensors for robotic navigation

“Today’s sensors typically don’t talk to each other,” said Mahesh Srinivasan, VP Smart Sensing & Display for Synaptics, on a conference call with Design News. “And today’s applications often require multiple sensors to be used together, in increasingly smaller form factors.”

Srinivasan noted that game controllers, for example, use multiple sensors, buttons, joysticks, and triggers. FlexSense uses companion software to centralize inputs from all sensors on a single processor. This helps ensure reliable performance despite variations in humidity and temperature and eliminates false or unintended sensor stimuli for devices such as smart thermostats, remotes, fitness bands, game controllers and the TWS headphones.

Related: Ultrasonic sensors are flourishing. Do you know why or how to make one?

The bottom line is that the processor allows for more nuanced sensing of user intent for gesture, swipe, force, press, docking, or button rotation. This allows developers to create a seamless and intuitive interactive experience for IoT devices, whether it’s games, automotive dashboards, or industrial controls.

The processor enables developers to speed time to market by providing a simple, out-of-the-box solution with a single processor and up to eight analog input channels that can be configured to mix and match up to four different sensors. CPU versions can also include a magnetic field sensor to allow Hall effect sensing built right on chip. This can be used for dock detection, touchless buttons and other applications.

The S1000 series controller is contained in a single enclosure measuring 2.62mm2down from the four CIs and 16.04 mm2 typical solutions, which corresponds to an 80% reduction in footprint. It consumes 240 µW (typically) in-ear (for a TWS application), and 10 µW in dock or “standby” mode.

According to Synaptics Mahesh Srinivasan, the processor will initially be available in three versions for different headsets. A version for a gaming platform and AR/VR applications will follow later. Samples are available now with production quantities expected later this year.