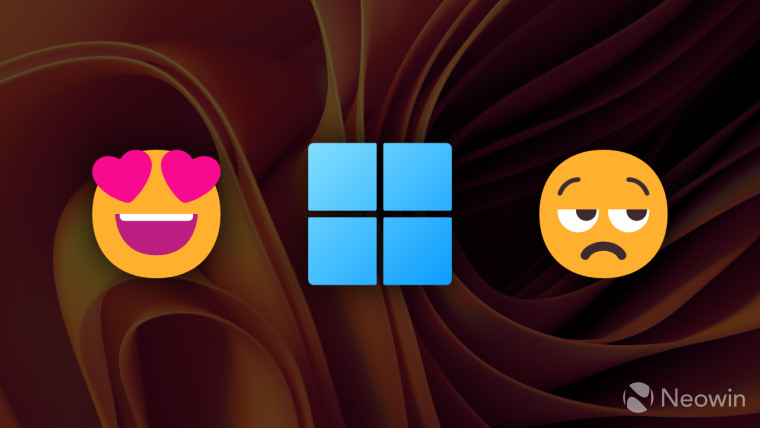 Windows 11 introduced many interesting features and changes. Some users love the productivity improvements, others love using Android apps on their computers, and many are happy to see the accessibility improvements. For me, the best thing about Windows 11 is its user interface. The newest operating system is a breath of fresh air after seven years of the overly primitive user interface in Windows 10.

While I agree that Windows 10 is better than Windows 11 in some ways, they aren’t enough for me to justify giving up the latter’s eye candy. The Windows 11 taskbar doesn’t trigger me as much as other users, so I’m willing to accept some of its pitfalls for a much prettier design. After all, now I can right-click on the start menu button to launch Task Manager. Of course, I understand that few users share my approach, so feel free to chat with me in the comments.

I don’t mean to sound like a blind fanboy, and I know Windows 11 is still a far cry from macOS or anything you can call a consistently gorgeous operating system. Microsoft still has a lot of room for improvement here, and in this article, I list five things I wish the software giant addressed in Windows 11 to make it look better. This is not a definitive list, just a few rough surfaces that annoy me as I use Windows 11 daily, and I’m sure you could add more.

For me, using dark mode during the day is as uncomfortable as using light mode at night. Although Windows and its applications received a dedicated dark mode many years ago, Microsoft still refuses to give users a simple but great feature: automatic theme switching.

I’m no software engineer, but I’m confident that implementing automatic theme switching isn’t an incredibly time-consuming or difficult task, especially when the foundation is already in place. Each mainstream operating system allows you to set custom times for theme switching or tie functionality to sunrise/sunset. It’s a key accessibility option that Microsoft continues to ignore for some reason.

Fortunately, developers thrive where Microsoft fails. Windows automatic dark mode, an ingenious third-party app and winner of the 2022 Microsoft Store Awards, has been one of my favorite programs for years. But while I love automatic dark mode and some of its advanced features, I wish Microsoft would teach its OS how to change themes at sunrise and sunset without third-party software. It would also be great to see Windows 11 go from dark mode to light and vice versa without the UI going haywire.

Battery percentage in the taskbar is another feature that Microsoft should copy from other operating systems. The battery indicator in Windows 11 is a slightly confusing thing. It clearly has fewer charge level steps compared to what Windows 10 has, and I often think my laptop has a lot less battery than the indicator is trying to tell me. Just look at the screenshot below.

The indicator seems to miss a third of a charge rather than 21%. Sure, you can get an exact battery level by hovering over the battery icon, but that requires extra steps, which I don’t want to do as someone who gets too easily distracted. Additionally, our laptops and tablets have large screens with screen-wide taskbars that can save several pixels to accommodate a slightly improved battery indicator.

My favorite change in Windows 11 2022 Update is definitely the redesigned volume and brightness sliders. Still, Windows 11 retains many old UI elements desperately waiting for a fresh coat of paint. The copy/paste dialog (and dialogs in general) is one of those parts that I want to see redesigned.

We can start with simple dark mode support, something enthusiasts have successfully implemented in tweaking software, such as StartAllBack. Also, Microsoft could replace the old Windows 8-style progress bar with something more modern and similar to the new volume/brightness slider. It may sound like I’m nitpicking, but the fact is that we encounter dialog boxes and a copy/paste UI far more often than the redesigned task manager with its fancy interface and dark mode support.

Here’s another area of ​​the Windows 11 UI that hurts me. Although Microsoft has restored the ability to drag and drop files to the taskbar, pinning apps doing the same is strangely confusing. You can’t pin an app to the taskbar from the Start menu, and all you get is a stop icon indicating a prohibited action. But go to the “All apps” list, drag an app in and voila – it appears in the taskbar like no one’s business.

In the end, it all comes down to the Windows 11 taskbar and Start menu remaining raw and in desperate need of more improvements. Windows 11 is the next-generation operating system that should focus on enhancing the strengths of Windows 10 instead of crippling them.

As I’ve said before, I’m the kind of user who can accept some feature trade-offs in favor of eye candy. But I can also understand that the force of habit and muscle memory is too strong for some. Many people stay away from Windows 11 just because of the downgraded taskbar with its many issues. To name a few: no right click to launch Task Manager (addressed in latest Dev versions), no option to hide volume/network/battery indicators separately, sloppy drag and drop, menu Start confusing, and many others. Unfortunately, these complaints are still relevant even a year and a major update after the launch of Windows 11.

I like the user interface and overall design language of Windows 11. It’s beautiful, sleek, and modern. Unfortunately, it’s also significantly slower than Windows 10. Context menus take a lot longer to appear, and you can often spot parts of them loading on the fly. For example, I’ve lost count of how many times Windows Terminal has randomly disappeared from the context menu. In addition, control and notification centers sometimes refuse to open, or widgets take too long to start.

I experienced all of these symptoms on my laptop with an 11th Gen Intel Core i3 processor (not a powerhouse, but also far from a minimum supported processor) and my desktop with the Ryzen 5 2600. And don’t tell me to buy newer or more powerful hardware – Valve’s latest data shows that your average Joe isn’t running Intel Core i9-12900K and RTX 3090 Ti processors hooked up to a 300Hz monitor.

Windows 11 is a beautiful operating system that I enjoy using every day. It’s great to see Microsoft finally investing more in making Windows more sleek, modern, and smooth. It’s an operating system that gets the job done while looking great. Still, Microsoft shouldn’t stop halfway. UI consistency and better attention to detail will help more users deal with some of Windows 11’s shortcomings. Design consistency are the only things modern versions of Windows lack. And yes, the taskbar also needs work…