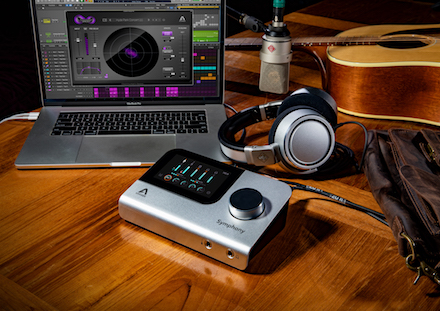 The most basic feature of Apogee Digital’s Symphony Desktop is its ability as a two-channel audio interface. Apogee offers a range of portable interfaces, but Symphony Desktop represents the company’s first offering of its high-quality converters in a desktop form factor that’s easily moved around. Boasting a pair of Apogee’s flagship Symphony mic preamps and analog inputs, Symphony Desktop scored high marks in a recording project undertaken for this review. A simple song titled “Do it Again” was written and recorded at Happy Club Studio in Wheaton, Illinois to compare the performance of Apogee’s Four Channel Quartet (a commendable unit with its own merits) and Symphony Desktop. All parts were tracked directly into the two units in succession without using external preamps, with settings and mic placement as identical as possible. Mixing engineer Miro Svetinsky acknowledged the general difference between the output of the two units. “The Symphony Desktop tracks were clearly more open and detailed than the Quartet tracks,” he said. You can hear the results on the comparison links below. 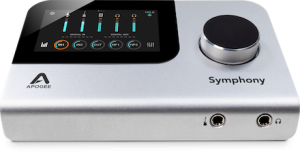 A similar comparison was made previously between the Quartet and an optimized MOTU 828mkII interface, a contest which the Quartet easily won based on sound quality. With its optical input, Symphony Desktop is a flexible 10×10 audio interface. Key features include DualPath workflow to enable low latency recording with effects enabled, allowing singers to inhabit a song’s mood while tracking. Users can control a choice of three versatile modeling preamps that offer parallel capabilities to high-end Apogee, Neve and Ampeg hardware. Symphony Desktop can control printing and monitor effects that come with Symphony Desktop or are available as add-ons.

The included ECS channel strip is a sound shaping tool tuned by mixing guru Bob Clearmountain that provides EQ, compression and saturation. Other plug-ins available include pristine reverb emulation and additional EQ and compression options painstakingly modeled after coveted tube and solid-state recording studio equipment. Apogee’s Control 2 software allows users to connect and control Symphony Desktop functionality with DAWs such as Pro Tools and Logic Pro, as well as day-to-day functions such as transferring audio from a deck to a laptop for recording and playback. (MSRP $1495; apogeedigital.com)

2022-03-29
Previous Post: How to get the new Gmail interface the way you want
Next Post: Smart Platform Management Interface Market Size, Growth Drivers, and Forecast