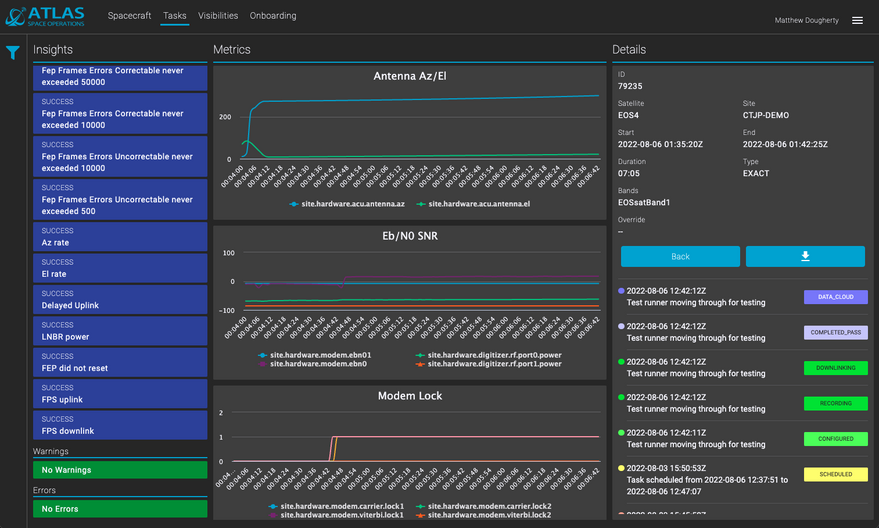 LOGAN, Utah – Atlas Space Operations has upgraded its user interface to make it easier for customers to schedule communications with their satellites and quickly confirm if data has been transmitted.

Through the new user interface, Atlas shares the data and measurements the company collects at each ground site for each satellite pass.

“Through our user interface, our customers can see all of the checks performed by our operations team and report every pass,” said Brad Bode, Atlas Founder, Chief Technology Officer and Chief Information Officer. SpaceNews. “It gives operators insight into how our team determines the success or failure of a pass. Passes don’t fail that often, but people want to know what’s going on.

By sharing information about each pass, Atlas also “allows customers to resolve issues as quickly as possible,” Bode said.

If a satellite fails to transmit data during a pass, for example, the user interface shares this information with the satellite operator.

“This tool is important to put in the hands of customers who don’t have a large software team that can code the solution,” Bode said. “As an operations team, we know what to watch and we want to offer that for free to our customers.”

The new user interface is also designed to make satellite transit planning easier for customers. The satellite operator can view the passes that have the highest probability of being assigned or scheduled.

“It offers the satellite operator, especially one with only one or two satellites, the ability to visualize which passes have the highest probability of success or are guaranteed to succeed rather than guessing,” said Bode said. “A lot of times customers ask for a pass, get rejected, and ask for another one not knowing what’s available or not.”

To remedy this, Atlas exposes its planning through the UI.

Whenever a client’s satellite will be visible overhead and communications will be possible, Atlas indicates the probability of contact.

If the probability is 100% for a specific passage, it means that there is no contention in the entire Atlas network and communications are virtually guaranteed.

“If you have an urgent task, you want to choose the 100% free visibility,” Bode said. “Now, if you see 80% free, you can ask for a little less visibility. What we’re saying is you can get a request for a little less time and we’ll get it for you, rather than an all or nothing approach.

“We want to foster a new community of what everyone calls NewSpace,” Bode said. “But it’s complicated and it takes a lot of time. We need to use software to eliminate some of these problems and make them easier to solve until people can fully integrate from machine to machine.